This 2020 Legacy Award scholarship recipient chooses to surround himself with people who share a passion for empathy, kindness, and selflessness. He seeks leadership opportunities where these qualities are utilized and honed. He looks for situations that help him to grow as a person and a friend.

From an early age, Zachary Upham’s parents taught him strong values and beliefs. With a father in the Army and formative years learning Boy Scout Law, the groundwork was set for living a service-filled life. Currently, in the Civil Air Patrol, Zachary follows core values that include integrity, volunteer service, excellence, and respect. His uniform is worn proudly as it’s a sign of respect for the military and all the men and women who have served our country.

Zachary’s talents are far-reaching. This Lakeville High School Senior has been on the swim team since seventh grade and its team Captain. He is a member of the National Honor Society, president of the Students Against Destructive Decisions, a Faith Club Officer, a member of the Student Voice - School Improvement Team, and a Panther Prep Leader. Zachary admits to being in situations that have tested his integrity and states that he “came out on top because he doesn’t plan on making any bad decisions.” Being a role model means that you lead by example.

Outside of school, Zachary volunteers at church and for Habitat for Humanity, and is a lifeguard and a self-proclaimed “outdoorsman.” He enjoys hanging out at the cabin and 4-wheeling, boating, and canoeing.

Zachary plans on attending the University of St. Thomas and swimming for their team. He’ll also join the Army ROTC and would like to branch into Army Aviation and fly a helicopter. Like his father, Zachary’s goal is to make the Army a career.

Lakeview Bank is proud to honor youth that make the strongest positive impact. Congratulations Zachary, we acknowledge and appreciate your dedication to excellence.

Teagan Klinkner is quick to praise and recognize the virtues of others. She’ll talk in detail about the athletic talents of her younger brother, how her mother – one the best bakers ever – is destined to be a Chaplain, and that her operations superintendent father was also at one time a pastor. It’s readily apparent that Teagan recognizes the importance of a positive upbringing and that it’s her mission to level the playing field.

Using communication as her tool of change, there’s a connection with other students through art, speech club, and National Honor Society activities. Whether it’s raising money for the Red Cross or requesting business suit donations for speech, Teagan has the power of persuasion that conveys a passion to give back in the same way her parents gave to her.

Quick to lead, define expectations, and hold herself and others accountable, it’s no wonder that peers call her a “mom.” Like a mother, when those close to her are struggling through tough times, she comforts and lifts them with a positive attitude. Being a cheerleader for all, Teagan gravitates toward clubs like Students Against Destructive Decisions and Activities with the Elderly.

Immersing herself in volunteer work, extracurricular activities, and church, Teagan makes a difference through mentoring others. Youth regularly learn about community support and the importance of developing a strong character.

Driven by the desire to be of assistance to those in need, Teagan plans on studying international relations and political science at Carleton College. She would then like to obtain a government job to open the doors to more opportunities and make changes at a higher level.

2015 marks a pivotal time for Mary Laeger-Hagemeister. That was the year that Mary, recently widowed, chose to reinvent her life.

Facing adversity head-on, she never gave up. After a disability forced her to leave the workforce at age 49, Mary chose to pursue a life of helping the less fortunate. She had a love of people and wanted to make a difference. However, Mary wasn’t going to donate her time to just any group. You see, volunteer work needed to center on activities that aligned with furthering her cause. She wanted to be put in situations that improved the quality of another person’s life through fair and just treatment. 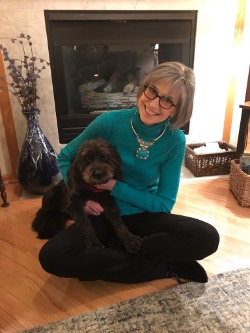 With a passion to instill in others human respect and understanding for all, Mary strives to build relationships. She volunteers at 360 Communities, is an active board member of the Burnsville Rotary, is co-chair of the Homeless Youth task force, and actively works to provide educational opportunities to women. Spurred on by an interest in immigration, she also joined a congregation that focuses on social justice and a social service program to further neighborhood connections.

Feeling richly blessed, Mary has a deep-rooted belief that, “for those of us to whom much has been given, much is required.” As a person of faith, there’s a desire to walk with people through life – through their joys, hardships and tragedies. An example of this is a three-month mentorship of an Ethiopian refugee family that turned into a 4-year relationship. Mary continues to visit them weekly – helping the family transition to a new culture, understand the school and healthcare system, and finally to obtain a home through Habitat for Humanity.

Because of the variety of volunteer positions, Mary has new friends that bring forth a sense of belonging. She is filled with joy and drawn to the challenge of meeting new people and learning about their backgrounds. Life is about loving and respecting all, and Mary has opened her home and heart to make a positive difference in this world.

Too often, we see mission and vision statements without the action to back them up. This is certainly not the case for Crystal Lake Automotive. With a personal commitment to customers, employees and the community, President Karl Drotning and Vice President Jim Siegfried work together to make a positive difference for the people around them. In their personal and professional lives, they go above and beyond expectations.

Both Karl and Jim have extensive industry experience. Both have filled the role of President and Collision Director of Minnesota’s Alliance of Automotive Service Providers. Between the two of them, they’ve served as Training Auditor and State President of IICAR, a national automotive training association, and participated on AASP’s Collision Advisory and Government Affairs Committees.

The list of leadership positions in the automotive field goes on and on. Karl and Jim are two genuine car guys that actively enjoy changing the automotive industry, and the community around them, for the better.

With a belief in “helping people through people,” Karl and Jim actively pursue ways to assist those in need. This is evident in their long-term financial support to the Robert Lewis house and 360 Communities, the Lakeville Education Foundation, local high school teams, and the Lakeville Public Safety Foundation and police and fire initiatives. But that’s not all. In 2013 the Crystal Lake Cares program was created to help families cover the cost of automotive repairs. To date, 78 families have received over $40,500 of free service. In addition, through a partnership with Progressive Insurance, Crystal Lake Automotive provides cars to wounded military veterans. 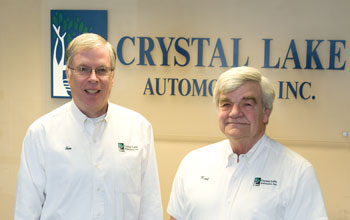 However, community support doesn’t stop at the end of the workday. Karl spent 22 years on Lakeville’s Planning Commission, was a community representative of the Met Council’s Land Use Advisory Committee and took part in City growth and study groups. Crystal Lake Automotive also hosts high school and technical college tours and provides mentorships and internships to youth in the area.

Crystal Lake Automotive puts the action behind the words and creates a caring, enjoyable and trusting culture for all. The dedication of Karl and Jim, indeed, goes above and beyond expectation.