During my banking career I have seen a great deal of change.  When I started in banking in 1977, a bank our size would have had around 150 employees.  Today, Lakeview Bank employs 20 people.  We would have had rooms full of fireproof file cabinets that stored all sorts of information—today, we have exactly one such file cabinet and our rooms are occupied by productive employees who retrieve information electronically.  The very nature of communication has changed as conventional mail, telephone calls, and in person meetings have largely been replaced by email, texts, and (somewhat unfortunately), Zoom or other virtual meeting platforms.  I could go on, but I think you get my point.

Technology…or more appropriately, the acceptance and adoption of technology…has made these seismic changes possible.  But even technology, as key as it is to our future growth and prosperity, wouldn’t happen without people.  And Lakeview Bank has been blessed with an abundance of talented people who embrace the essence of community banking and who have learned to use technology to the benefit of both their customers and themselves.

One of those talented people is Mike Puppe, who joined Lakeview Bank ten years ago as our senior commercial loan officer during the Great Recession aftermath.  Under his steady lending hand, we emerged from those dark days the healthy and strong bank that we are today.

A critical job of any senior executive, myself included, is to identify and mentor their successor.  After observing Mike’s work ethic, leadership, and vision for several years, it became apparent that Mike should be the next President of Lakeview Bank.  With the assistance and blessing of our Board of Directors, we developed a plan to both effect that change and to ensure a smooth and orderly transition when the change actually happened.

That change happened this past January when Mike was elected President of Lakeview Bank and I moved to the sole position of Chief Executive Officer.  If you have been in the bank since then, you might have noticed that Mike is in the office that I occupied for the last 16 years, and my office is now across the lobby.  I’m not going anywhere any time soon, but with my 66th birthday in the rearview mirror it is time to recognize that my role is changing.  I will be here to support Mike for some time to come, but I intend to do that without getting in his way as he grows into his new responsibilities.

If this change has gone unnoticed by you, then we have done our job well!  If you haven’t already done so, please stop in Mike’s office and congratulate him on his new position! 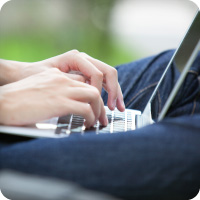 Conveniently transfer money to and from your accounts at other banks.

Providing accounts that will meet your business needs.