Join us as we congratulate the 2011 Lakeview Legacy Award Recipients!

A senior at Apple Valley High School, Jessica epitomizes the values that the Legacy Award was originally created to recognize in high school seniors. Jessica's parents moved to the United States from Morelos, Mexico, twenty years ago to ensure that their children were afforded opportunities they were not. Unable to finish middle school in order to help care for their families, they understand the important role that education plays in attaining a career that is both professionally and financially rewarding.

Jessica has both taken advantage of, and is grateful for, those opportunities. She has participated in her high school's college prep program, Advancement Via Individual Determination (AVID) for four years, where she leads the student leadership group and organizes community service projects. In this, her senior year, she achieved the A honor roll and was named Apple Valley High School student of the month. Just as she has reached out to teachers for help with her studies, she also pays it forward by assisting in teaching sixth grade catechism at Church of the Risen Savior. At Risen Savior, Jessica is a reader at Sunday mass and provides interpretation for the church's Hispanic worship services in addition to participating in the cultural dance group.

Upon graduation, Jessica will attend either NDSU or Iowa State to study architecture. As the first in her family to go to college she feels a huge responsibility, but also recognizes the opportunity will afford her to financially support her family in the future. Wherever her professional career leads, it will be guided by a selfless desire to serve others, as in Jessica's words, "giving back is a way of life in my community. I won't forget that, because it's how we all make the world a better place for everyone."

In January, 2012, our community lost one of its leaders when Nancy passed away after a long and courageous battle with cancer. Lakeview Bank was privileged to honor her as one of its 2011 Legacy Award recipients.

Nancy juggled both a demanding career as Senior Vice President of Operations at Hollstadt & Associates and a true heart for service to her community. At Hollstadt, she was responsible for service delivery, quality, staff development and the retention of a consultant staff ranging from 100-140.

A longtime member of the Lakeville Rotary Club, Nancy lived Rotary's motto of "Service Above Self". She co-chaired the club's successful "Taste of Lakeville" fundraiser, hosted a foreign exchange student, and participated in the annual Salvation Army bell ringing. But her service was not limited to just Rotary—she was a lifetime donor of over 11 gallons of blood, rode in the MS150 bike event for four years, and adopted a one mile section of her rural neighborhood road to clean annually. When she became aware of sled hockey, a sport designed to allow participants with physical and cognitive disabilities to play the game, she organized a sled hockey exhibition in Lakeville that in four years raised almost $5,000 for the Sled Hockey Association. She became involved not so that her three able-bodied children could directly participate in sled hockey, but so that they and their respective hockey teams might develop a greater heart for community service.

Professionally, her spirit of volunteerism was evident as well. She was extensively involved in the Project Management Institute, the International Institute for Business Analysis, and served on the Minnesota Business Ethics Award steering committee for four years, culminating in her position as co-chair. In fact, Nancy initiated Hollstadt's successful Minnesota Business Ethics Award entry in 2007.

Not surprisingly, at Hollstadt Nancy was known as the "keeper of the culture"—First Understand, Be Humbly Confident, Do the Right Thing, and Grow and Prosper. 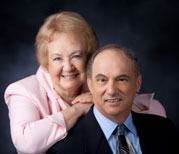 Even as this short biography of Tony and Dorothy Brama is being written, they are at a Chimbote, Peru mission leading a Los Amigos Medical Aid (LAMA) team of 49 medical, dental, and support personnel that is delivering life changing care to thousands of the poorest of the poor. While this act of care and compassion is their third such trip to Chimbote, it is just one of many ways that Tony and Dorothy Brama serve the less fortunate.

The first husband-wife team to receive Lakeview Bank's Legacy Award, Tony and Dorothy have a solid history of working together to improve the lives of others. In addition to being LAMA founders and directors, they have co-chaired a container project that ships medical, educational, and living supplies to the same Chimbote mission for distribution to the area's poor. To fill the containers they engage local Rotary Clubs, schools, hospitals, and other charitable organizations to secure the supplies that are shipped to Peru.

But their compassion isn't only for the poor in South America. Passionate about using their organizational skills to serve those in need, they also volunteer as emergency dispatchers for the Red Cross and serve as team organizers and volunteers for Habitat for Humanity.

Tony is retired from the Federal Aviation Agency, and Dorothy is a Registered Nurse with Hiawatha Home Care. With five married children and eight grandchildren living in the local community, they have plenty to do in their "spare" time!

Tony and Dorothy say that "service is the core value we encourage the most. We have noticed that almost everyone wants to help—they just need an opportunity."